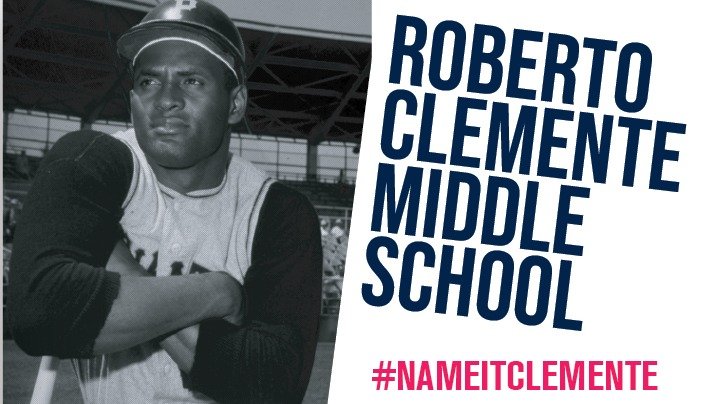 On February 25, the Orange County School Board decided to retire the Jackson name from Stonewall Jackson Middle School.

We surveyed the community around the school, and fifty-five percent were in favor of renaming the middle school after Roberto Clemente.

Roberto Clemente was a Puerto Rican MLB player who not only broke dozens of records, but was a champion for the Latino community. He dedicated significant philanthropic efforts to children in Puerto Rico, across the USA and Latin America. He also served the country in the USMC reserves, always helping people in need. On New Year’s eve, Clemente made the ultimate sacrifice, losing his life on a risky relief mission to Nicaragua after a terrible earthquake in Managua in 1972.

The School Advisory Council (SAC) will depend on community input when recommending a new name to the school board. Clemente’s story and legacy serves as an inspiration to young adults and would be the perfect name for the school. Add your name to let the SAC know you support renaming the school to Roberto Clemente Middle School.

This website uses cookies to improve your experience while you navigate through the website. Out of these cookies, the cookies that are categorized as necessary are stored on your browser as they are essential for the working of basic functionalities of the website. We also use third-party cookies that help us analyze and understand how you use this website. These cookies will be stored in your browser only with your consent. You also have the option to opt-out of these cookies. But opting out of some of these cookies may have an effect on your browsing experience.
Necessary Always Enabled
Necessary cookies are absolutely essential for the website to function properly. This category only includes cookies that ensures basic functionalities and security features of the website. These cookies do not store any personal information.
Non-necessary
Any cookies that may not be particularly necessary for the website to function and is used specifically to collect user personal data via analytics, ads, other embedded contents are termed as non-necessary cookies. It is mandatory to procure user consent prior to running these cookies on your website.
SAVE & ACCEPT